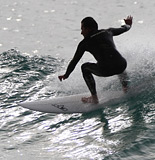 Professor of science and technology, QUT

Peter Bruza is a professor of science and technology at Queensland University of Technology. Previously he was a leader of the "Information Ecology" project in the Enterprise Distributed Systems CRC, based at UQ. This project adopted a holistic view in researching the interaction between people, information and context. During this time he was chief scientist behind www.guidebeam.com, a next generation internet search technology which was successfully commercialized and deployed in numerous government departments in Australia and overseas including the USPTO and National Security Agency. Peter Bruza holds a PhD in mathematics and computer science from the University of Nijmegen, The Netherlands (1993). Since graduating, he is primarily known for his development of formal models of information retrieval. In recognition of his research contribution in this field, he was appointed programme co-chair of the premier international conference in information retrieval - ACM SIGIR - in 2004. He serves on the international editorial boards of the Journal of Applied Logic, (Elsevier) Information Retrieval, (Springer), The Logic Journal of IGPL (Oxford University Press) and the book series Information Science and Knowledge Management (Springer). His current research turns around the question of how to develop information processing technology which is aligned with human cognition. This is a cross disciplinary enterprise spanning the fields of information retrieval, computational linguistics, applied cognition, logic and quantum theory.