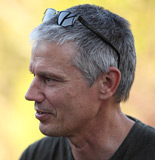 Neil is from Hamilton, New Zealand. He did a short stint of seismic surveying in the Bass Strait with Esso and enjoyed a few stormy days of seas rougher than he imagined possible. He worked at the CSIRO Division of Fossil Fuels and obtained a M.Sc. (Phys) at the UNSW. Since then he's been doing IT work, initially embedded engineering applications and telecommunications and finally more general IT, in the UK, NZ, Belgium and Australia. Neil moved back to Australia from Belgium to be warm and live near a nice surf beach, but something went wrong with the plan and he ended up in Canberra and cycles instead of surfs. Neil has worked extensively on Cambia Sequence Software.